i Nov 15th w Comments Off on Won’t you meet our neighbor: Trisha Pitts x by wphawebsite

Trisha Pitts has called Washington Street home for the last 21 years. In fact, she is now the longest-tenured resident on the block! This bridge-playing seasoned traveler is keeping plenty busy during retirement.

Why did you choose to live in this neighborhood? When I came back to this area 21 years ago, I thought I would rent first, but a realtor showed me this property after showing me a number of rentals. I realized I would pay more in rent than in a mortgage payment. I decided to buy this house and then sell it after I decided where I really wanted to live. I have never moved. I just love the area.

Occupation (past or present)? I am a CPA by training, and my last position was Director of International Finances for Unbound,a nonprofit headquartered here in Kansas City. I have been retired for four years.

How do you like to spend your free time? I do volunteer work, and am a competitive duplicate bridge fanatic.

What is at the top of your bucket list? Maybe visiting Ireland and Scotland.

What is something most people don’t know about you? I was part of the first group of Peace Corps volunteers to go into Armenia after the collapse of the Soviet Union. I have lived, worked or traveled in 42 countries.

What’s the most interesting feature of, or story about, your house? It is an aggravating feature — the dip in my driveway. When the house was built in 1924, the garage was in the basement. Later, a freestanding garage was put in the back, and the driveway extended. It should have been filled in and leveled, but no.

What is your favorite event or memory of the neighborhood? Shortly after I moved in, the neighbors had a block party. I got to meet most of my neighbors, which was such a wonderful thing. We did another block party this past summer for our new neighbors.

What is your favorite area business/restaurant/meal/drink/service? Waldo Pizza.

Is there anything you would change about the neighborhood? It might be a good idea to revisit parking on the streets. The corner of 73rd and Washington Street is pretty dangerous because cars park so close to the corner, making it difficult to see if cars are coming down 73rd. 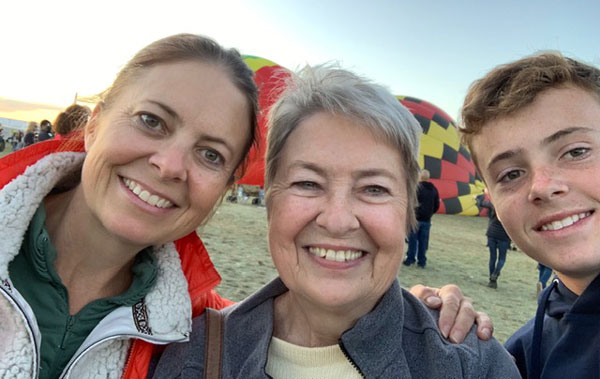 Trisha Pitts flanked by her daughter and grandson

The 2020 membership drive is off to a successful start! We had 200 homes renew or join the Ward Parkway Homes Association during the first month of the drive in October. Of those, a record number of residents signed up for the KCPD security patrol this early in the fiscal year. Several residents became members at Neighborhood Night Out held at The District in late September. It was the first time we offered a convenient online payment station at that event. The WPHA Board is excited about the momentum and enthusiasm shown by our neighbors. Thank you to all who have paid dues for the 2020 fiscal year so far!

We live in one of the safest neighborhoods in Kansas City, and we know that deterring property crime ranks high among our residents’ feedback about what they want to see from WPHA. That’s why we need you to join WPHA as a Platinum member, to ensure we are able to maintain the KCPD security patrol for our neighborhood. We only need 100 more homes to sign up for the KCPD security patrol to guarantee WPHA can continue to provide this valuable service for our entire neighborhood. Should we have to cancel it in the future, the WPHA would go to the bottom of the waiting list KCPD maintain of other neighborhoods that want to provide this service to their residents. The waiting list is long and we would likely wait many years to get the service back. You can ensure that doesn’t happen. You can ensure KCPD security patrol continues to be part of our vibrant neighborhood.

In addition to the KCPD security patrol benefit, there are also other benefits included in your membership:

Renew your membership or become a first-time member today!